I recently watched HBO’s Chernobyl mini-series and was inspired to make my own Geiger counter.  Instead of radiation, I decided to measure a more common environmental hazard.  Farts.  Every day billions of people worldwide are exposed to fartogens.  Modern food processing is causing humans to produce fartogens on an unprecedented scale.  The troubling thing is that we still have not devised a method for discriminating between those who smelt it, and those who dealt it.  However, that is about to change. I have invested dozens of dollars of my own money and countless hours of my time while exposing myself to all sorts of horrible smells to deliver the world’s first fart geiger counter.  In this article I will discuss how a fart geiger counter works and how you can make your own.

To understand how a fart geiger counter works, we need to understand what a fart geiger counter measures.  A fart geiger counter measures the concentration of fartogens in the atmosphere.  Fartogens are produced by flatulegenic compounds in the body through a process known as flatulegenesis.  Fartogens, like other gases, expand to fill their container.  In a sense, the human olfactory system is a sensitive fartogen detector.  Unfortunately, our olfactory capacity is quickly diminished in the presence of odors, making it difficult to precisely detect the source of an offensive smell.  This is known as olfactory fatigue.

Luckily sensors exist that can also detect fartogens.  The MQ-135 hazardous gas sensor is such a device.  Mercifully, this sensor is also capable of detecting fartogen analogues like alcohol.  Incidentally, alcohol produced through fermenting malted grains are known to be fartogenic potentiators in mammals.  I will demonstrate my fart geiger counter with alcohol in place of the genuine article.  However, the reader may rest assured my fart geiger was field tested on its intended source.

Additionally, download and install the version of Arduino Studio for your operating system. 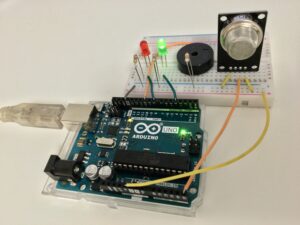 The software for the fart geiger counter is simple.  As the value of the reading increases, the frequency of writing to the pins that the piezo speaker and the red LED are connected to is also increased.  This produces a geiger counter like sound as well as a flashing red light.  A random delay is added between readings with maximum value that corresponds to the current reading to ensure the output is varied but consistent to provide a similar reading that a real geiger counter might.  In order to trip the sensor the current reading must be greater than the threshold for background fartogens.

To test the fart geiger counter humanely, douse a rag with a small amount of alcohol and pass the rag in front of the sensor.  The fart geiger counter will flash the red LED and emit sound.  If you are unable to possess alcohol due to age or legal decree, a meal from Taco Bell may be suitable for producing adequate fartogens for testing.

3.6 fartogens.  Not great, but not terrible.